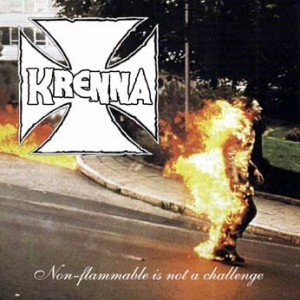 Krenna’s début EP, recorded at Basildon Studios, and produced by Pete Booker.  The CD is no longer available, but it can be downloaded in mp3 format from the following sites:

The Simpsons episode “Bart to the Future” (aired 19th March 2000) has the chalkboard gag “Non-flammable is not a challenge”.

Hundred Reasons released the album “Shatterproof Is Not a Challenge” in March 2004.